Referring to the company which puts on the display, Fire Chief Mike Ramm stated, “We’ll be with them as soon as they get here and pretty much stay with them until after the fireworks are over. We’ll be back at the site the next morning as well, just to be sure no unexploded shells are around.”

Chief Ramm said the company which will be setting off the display usually arrives 24 to 36 hours before the July 3 display.

On the day of the fireworks, the Department has equipment and personnel both at Centennial Terrace and at Pacesetter Park in case there is an issue requiring an immediate response. Ramm noted that Richfield Township usually sends a crew which stands by at Central Trail Elementary School near Mitchaw and Brint roads.

Weighing in on preparations, Police Chief Paul Long said “Everybody knows you have to work the Third. Officers will be assigned to traffic duty in directing vehicles into and away from the area after the display.”.

Final details of permitted traffic flow have been made and a map is available for the public.  (See link below)

“We want everyone to know in advance where there is no parking and what streets will become one-way for the event.”

Chief Long added that he and his officers know there can be frustration for drivers leaving the area, but if everyone cooperates with the plan and follows the directions of officers, “it’s just going to be a lot better for everyone.”

McMahon continued, “Pacesetter Park is another great option for viewing the fireworks show. Pacesetter Park will offer inflatable play features and the opportunity for families to set up “picnic style” on the 100+ acres of grass area. For additional details, please visit centennialterrace.org.” 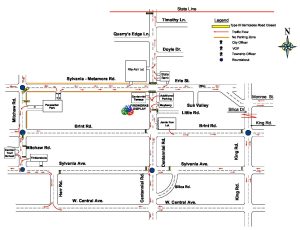